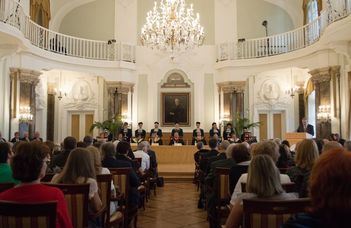 Social sciences have a long and lively tradition in Hungary. Throughout their history, politics has often intruded into the development of the social sciences, and sociologists had to fight against those in power in order to maintain traditions and continue creative research and education.

The Social Science Association was founded at the beginning of the 20th century. Its founding members, influenced by Spencer, Durkheim and Tarde, conducted the first empirical research in the country. The Association, together with other social sciences groups such as the Galilei Circle and the Sunday Circle (Vasárnapi Kör), gave many famous scholars to the world, such as George Lukács, Karl Mannheim, Karl Polányi and Michael Polányi.

In 1919, two sociologists, Karl Mannheim and Oszkár Jászi (founder of the Social Science Association), were appointed as Professors at the University. After 1919, Mannheim, Jászi and other illustrious sociologists involved in liberal or radical politics had to leave the country.

In 1942 a Chair of Social Philosophy and Sociology was created at the University for the conservative sociologist István Dékány. In 1945 Dékány had to leave the chair. A new Institute of Social Sciences was established in 1946 by Professor Sándor Szalai. After a short but lively period of activity the Institute was dissolved in 1949 and Szalai was imprisoned by the Communist regime that took over the country.

Late state socialism – Foundation of the Department of Sociology at ELTE

It was not before the mid-sixties that Sociology was re-institutionalised in Hungary, when a Sociology Research Group, headed by Professor Tibor Huszár, was created at ELTE’s Faculty of Humanities. In 1970, the Research Group was transformed into a teaching department.

At first, the Department of Sociology offered postgraduate courses to students who were already engaged in social research and education in the social sciences. The first undergraduate courses started in 1972. During the 1970s the Department became a leading centre in both education and research. The number of students and teaching staff grew fast and they became more specialised. In the late 1970s, research interests covered practically the whole domain of contemporary Sociology and resulted in the Department being divided into four sections: Theoretical Sociology, History of Social Theory, Social Research Methodology, and Social Psychology.

The number of students grew continuously during the 1980s. In 2003, the Institute was joined by other departments of ELTE University to form the new Faculty of Social Sciences.